Anatomy of a Killer 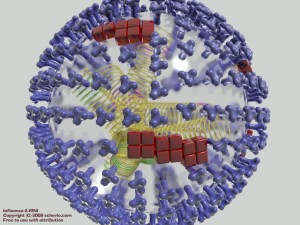 (My Render of the H1N1 Influenza Virus)

When you ask someone to name the deadliest disease, they immediately rattle off “AIDS” or “cancer” or “heart disease.” A couple of these are pretty good guesses. Heart disease kills about 650,000 people a year in the US. Cancer takes another 560,000. AIDS, although scary, isn’t even in the top 15, killing only 14,500 in the US annually. (Suicide is over twice that number.)

The granddaddy of all killer diseases is actually the flu. In a typical year in the US, influenza kills from 30,000 to 60,000 people, ranking it the number 8 killer in the country. But it’s in those atypical years that influenza really shows off.  Flu pandemics have been recorded for at least 500 years, the last REALLY big one in 1918. There was a world war going on at that time which, over five years, killed 37 million people.  In a single year, influenza killed twice that many. In the US alone, 500,000 died (the equivalent of 1.9 million at today’s population).

Influenza is a tricky disease to control because, unlike polio which can be eradicated, it crosses over from species to species. Ducks and other birds are the most common virus reservoir, but pigs and several other animals can also be infected. As it crosses from host to host, it mutates, crossing with other strains of influenza, picks up little bits of RNA here and there, and emerges as a new threat. It’s the fact that humans live with and raise these animals that causes epidemics.

Like all viruses, influenza does its damage by hijacking the host cell’s genetic machinery to reproduce itself. It does this by injecting its eight coiled strands of RNA into the host cell nucleus. (You can see them in the picture, colored to represent their human, bird and swine origins.)

Because it has an RNA core instead of a DNA core, influenza has a much higher mutation rate (DNA provides a degree of  “spell checking” and error correction during replication.) This high mutation rate is one of the things that makes influenza so difficult to predict and fight.

In contrast to AIDS, which kills by disabling the body’s defenses, influenza kills with the victim’s own immune system. As the immune system starts to recognize the influenza infection, a positive feedback loop can form between the immune cells and the chemical messengers which summon them. In this “cytokine storm,” the immune response escalates out of control until fever, swelling, fluids and large numbers of immune cells themselves cause critical systems to collapse.

H1N1 gets its name from the surface proteins hemoglutinin (blue buds in the picture) and neuraminidase (red cubes). It’s the job of hemoglutinin to latch onto the host cell so the virus can infect it. Once infected, the host begins manufacturing copies of the virus. Neuraminidase enables those copies to exit the cell so they can infect their neighbors.

It is the mutation of these surface proteins that requires us to make specific flu vaccines every year, based on our prediction of the dominant strain. (The last outbreak of “bird flu” was H5N1.) If we guess wrong and the proteins don’t match, the vaccine will be ineffective.

Because of its genetic promiscuity and mutation rate, the long term defense against flu will have to be antiviral agents, not vaccines. Although we don’t have any solutions yet, there are several promising new directions under research. Until then, wash your hands, keep them away from your face, and get a vaccination if you are at particular risk.

I have uploaded a very short animation of this model to YouTube here. (Be sure to click the HQ option or it looks awful.)